Yoda brings his “out of this world” full AV show to Limerick for the very first time. He be’s been blowing away audiences for quite a while now and played one of the highlights of Sea Sessions back in 2013. The organisers got so many requests to bring him back that they had to have him back in 2014. He really is so worth catching. Here’s a brief Bio’.

“Duncan Beiny aka DJ Yoda is no ordinary scratch DJ. His seminal How To Cut & Paste series showcased a tongue-in-cheek mixing style that prompted Q Magazine to declare him “one of the ten DJs to see before you die”, whilst Hip Hop Connection voted him “one of the top three DJs in the world”.

From his hip-hop beginnings, DJ Yoda has evolved in the past ten years, using his turntable skills and influences as diverse as funk, b-more, kuduro, reggae, drum ‘n’ bass and even big band swing and country & western, to make unashamed party music. No stranger to cutting the Indiana Jones theme with woofer-worrying dubstep or the Muppet Theme with 1930’s swing, his shows are peppered with film, TV and YouTube samples and visuals that lift his sets to new and stratospheric heights.

Trail-blazing into the world of the audio-visual he has pioneered a new art form, using cutting edge technology that he has been instrumental in developing, to scratch and mix visuals on top of his DJ sets in clubs. Transforming the average night out into a fusion of clubbing and the movies, his recent AV tours have included “National Video Vacation” and “The Wonderful World of DJ Yoda”.

“DJ Yoda was instrumental in creating the bootleg ‘cut-up’ mixing style. Whilst most other ‘superstar’ DJ’s were macho-postulating and demanding huge fees, Yoda was doing it for laughs… Nearly a decade later, in an era of playlist-skipping and remixes of bootlegs of bootlegs, he’s more relevant than ever.” XYZ Magazine 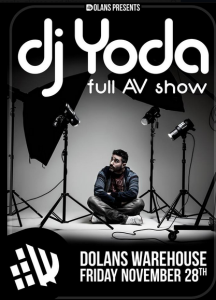